It’s the fast and furious game of 1000 silly faces. Put on the plastic glasses, roll the dice and if noses, hats, ears or eyes come up players then race to put it on a player of their choice.

Each player gets a big red pair of plastic glasses on which different parts of masks can be attached: one part for the hat (or top of the head), one for the nose, two for the ears, and one for the eyes (some of the later also hinder sight).

Players take turns to roll a six sided custom die with faces, which determine, which part can be added to a face. Then everybody tries to first hit the correct “button” tile in front of the players, to be allowed to place such a part onto another player. Additionally there is a “wild” die face, which allows to place any part and a “bad luck” one, were another player may put a part onto the player, who rolled the die. The game ends when there is only one player with gaps on their glasses. 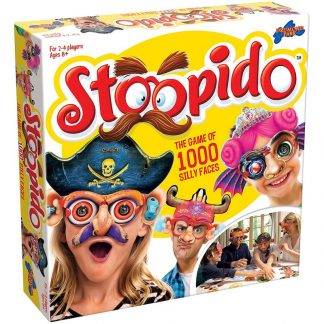